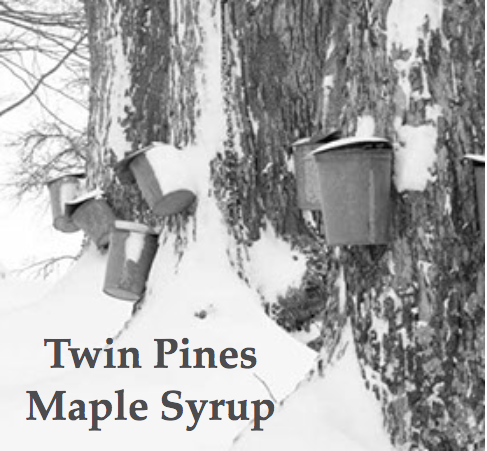 When most people think of maple syrup, they think of Vermont or Canada. Yet New York State has plenty of woods, known as sugarbushes,providing syrup and producers who are eager to introduce their crop to those who think that all brown syrup they buy in a plastic jug is the real thing.

The Huxtable family has been making maple syrup off their sugarbush on Twin Pines Farm for almost 150 years, when my great, great grandfather, D. G. Young began to make syrup in the maple woods behind the farmhouse. Dave Huxtable, my 80 year old uncle who recently passed away, ran the business for many years. Today, Pat and Karen (Huxtable) Hooker manage the family enterprise.

Many claim it’s the best they’ve ever tasted and wouldn’t think of a pancake or bowl of ice cream without it.

As children, my sisters and I would fall asleep under the warming pans in the sap house while our Dad and uncles boiled the sap. We walked through the deep snow to help carry buckets of sap. We’d also enjoy fresh syrup poured on new snow called “Jack Wax” when it was ready.

Most people have never experienced pure maple syrup, one of the most natural and unadulterated liquids, even after processing. The clear, light-green sap is now piped directly from the tree into a huge steel vat, then boiled down for several hours. The classic production process may conjure up rustic visions of burly guys in plaid shirts hauling metal buckets through the woods, pouring hot syrup into battered metal pans laid atop the snow, steaming sweetly in the winter air.

Hardly. While some makers still use buckets and do much of the work by hand, serious maple syrup producers long ago switched to a system of blue and black plastic tubing that makes their woods look more like outdoor laboratories. Forest creatures like deer, squirrels, and coyotes love to gnaw on the tubes and suck out the sap, making daily checks of the lines a necessity.

The process begins with thousands of feet of line stretched at chest height, transporting sap to the high tech machines that transform it into sugar, maple cream, and syrup. Every year the Huxtable family taps their trees once the daily temperature shifts produce the necessary combination of freezing cold nights and warmer days that cause the sap to flow freely. Using a peg called a spile, they pierce the bark, attach the tubing, and a central vacuum pump ensures a smooth, steady flow of sap.

The journey from tree trunk to bottle? About 12 hours.

A mini-waterfall produced by the combined flow from trees starts the process. Once the sap is collected, it is run through an evaporator, which can process 750 gallons of sap per hour, removing almost all the water, which boosts sugar content from 2.6 percent to about 68 percent. A reverse osmosis machine speeds up the process.

I grew up on Twin Pines Farm, a more than 200 year old family business that produced maple syrup for most of that time. I remember the old days when a huge cast-iron stove could be found in the former sap house. I fed the red-hot maw with logs to keep the liquid boiling. It takes 35 gallons of sap to produce one gallon of syrup, the rest evaporating into huge clouds of condensation.

Many Americans have never tasted real maple syrup. Many buy syrup that doesn’t contain maple at all, and have no idea what they’re missing. The distinctive and subtle flavor of maple in the syrup tastes great with a variety of foods, not just pancakes. Poeple love it with vanilla ice cream, baked beans, sweet potatoes, and glazed ham.

Once acquired, the taste of maple runs deep. Just ask a Huxtable!